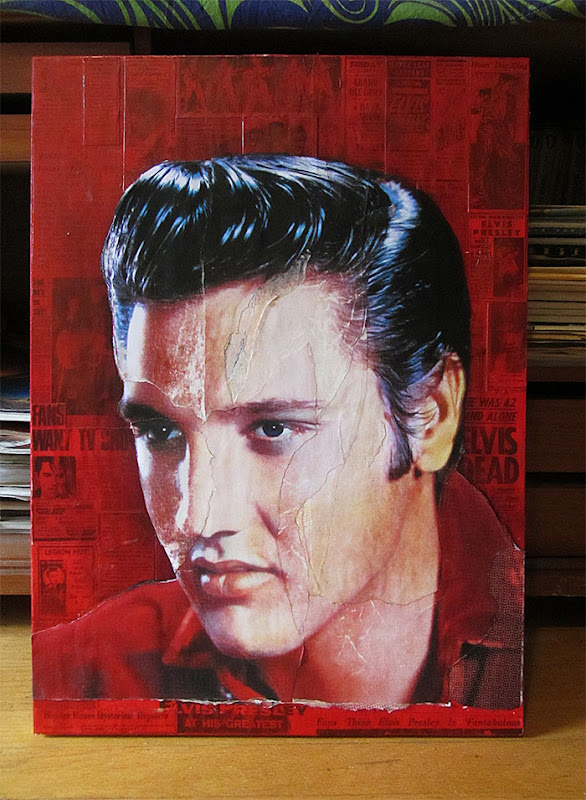 If you’re going to Bumbershoot this weekend, be sure to swing by the ELVISTRAVAGANZA! exhibit curated by Marlow Harris and Jo David. Some of the work that Jo David has been posting on the blog is incredible, I think this is going to be great.
“50 years ago, in 1962, we celebrated the Seattle World’s Fair. 50 years ago, the King of Rock and Roll visited Seattle and made the film “It Happened at the World’s Fair”.
In honor of these two momentous occasions, Bumbershoot 2012 – Seattle’s Music & Arts Festival is proud to announce the Return of The King to the Seattle World’s Fair and the Seattle Center in an ELVISTRAVAGANZA of art, music and performance.
Saturday through Monday, Sept 1st, 2nd and 3rd see The King in all his many personas at ELVISTRAVAGANZA!  See them all, the handsome young singer, the King of Rock and Roll, the Army private, the Hollywood Movie Star, the Hawaiian E.P., and the later Las Vegas King.
The story of Mr. Presley is a heroic tale of lost innocence, of success, excess, and the chronicle of the rise and fall of an American icon, and his final redemption. Celebrate legendary royalty with us!
Join us Labor Day weekend Sept 1-3, 2012 at Seattle Center Pavilion for ELVISTRAVAGANZA!
The special Mayor’s Arts Awards Day and free public preview and artist reception party for ELVISTRAVAGANZA! is on Friday August 31st, 2012 – noon until 9pm.“
Here’s the Elvis collage that I dropped off at their place last week. I haven’t done any “fine art” in ages and it didn’t turn out as planned, but I am inspired to get back to working with colored pencils and paint again.